Computer fans are one of the components that we care the least about while it’s an utterly important part. We almost don’t notice it until the fan stops spinning and problems arise. But when it happens, we are often clueless about what to do. This is a very common incident.

You can check your CPU fan by just opening up the case lid and inspecting the connector wire and the fan itself. For laptops, you might have to open up the back lid and unscrew a few things to open, check, clean the fan.

Let’s go deeper inside the computer case and check the computer fan to know how it’s performing to ensure the smoothness you want.

Why Is A Computer Fan Important?

You all may know that there are several fans inside a computer. These include CPU fan, PSU fan, case fan, and GPU fan (if you have any external GPU).

We’re talking about a CPU fan that is mounted on the processor to cool it down through air vents. This ensures the optimal heat level to keep it at the maximum performance, for both the CPU and GPU.

Why is a computer fan or a laptop fan important? It is because if the computer fan not working, the processor will quickly overheat after a small CPU usage which may result in several damages to the internal components. You may face several other problems regarding hardware components.

What if the computer fan performance isn’t up to the mark or the fan stop spinning completely? Let’s see.

If the CPU fan stop working, your computer will start shutting down frequently. This is risky because you may lose your important data. In some cases, the computer needs to be rebooted manually.

But mostly, you might face difficulties in rebooting the computer until the CPU isn’t cooled naturally.

How To Check If Computer Fan Is Working Properly?

There are three main ways of checking if your computer fan is working properly or not. Let’s get to them one after another. 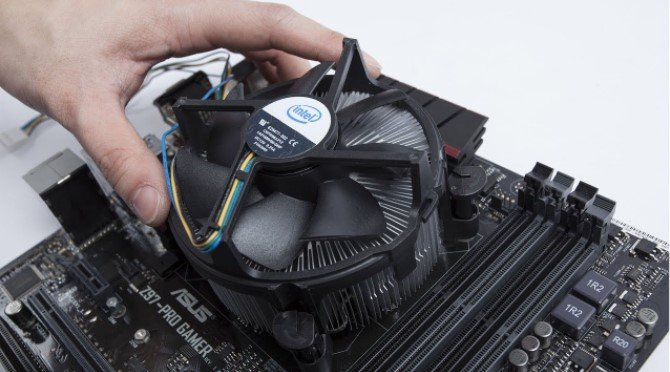 When you boot your computer, you might hear the computer fan making unusual noise. If the noise is absent, you can doubt the fan isn’t working properly. To check the fan closely, you can remove the side panel of the case and take a thorough look at the computer fan.

Check The Fan Through BIOS

Checking the BIOS will give you an overview of whether the CPU fan is working or not. To do this, you need to go to the BIOS of your computer. If you don’t know how to do this, follow these steps.

Different software can be used to detect the condition of the CPU fan. Depending on the product model of the CPU and motherboard you are using, you can use something like SpeedFan or MSI Afterburner to determine whether the fan is working or not.

This is the easiest way to check the CPU fan as you don’t need to go inside the casing. It can be an effective method in the case you’re in the finance industry and using a laptop. Removing the back panel of laptops isn’t as easy and as removing the side panel of a desktop computer.

But, the good news is, Business laptops are easier to handle and usually come with an easy back lid to open and clean.

In many cases, CPU fans don’t get enough torque to start spinning. You can simply shut the computer down and reboot it. If there isn’t any other problem, the fan should start working immediately. Don’t forget to check power cables before this.

The CPU fan can be covered with dust if you don’t clean the inside of the chassis for a long time. Due to dust build-up, the CPU fan might get clogged and stop spinning. Sometimes, small debris prevents the fan from spinning.

In such cases, use a dust blower to clean the dust or debris. Once you are done, reboot the computer and the fan should start working properly.

If the fan still doesn’t work, you might need to check the fan. If it doesn’t work on another computer, the fan is probably damaged and you need to buy a new fan. CPU fan is cheaper than other components, so we will consider this step first.

A common reason behind the computer fan not working is the inadequate output voltage. If the fan doesn’t receive enough CPU power from the PSU, it won’t work properly. So, if you find the fan is okay after the previous test, you can try replacing the PSU.

This is the second last thing you might want to do. But if the previous methods don’t work, you need to do this.

If any of the above-mentioned methods don’t work, you can check the fan with another motherboard. If it runs, you can tell that your motherboard is faulty. In that case, you need to change the motherboard to get the fan working. Well, in some cases, the fan header is the culprit and a mechanic can easily get it fixed instead of replacing a costly mainboard.

Once you have the idea about how to check if computer fan is working properly, you can find the possible ways to deal with it. If you end up with a fan not spinning at speed, or not at all, stay calm and check the fan periodically.

Clean all the fans from time to time, especially the CPU fan that keeps the processor cool. Keep the fans away from major damages like cracking or bending. If you have a faulty CPU fan, be sure to replace that before you start the PC again.